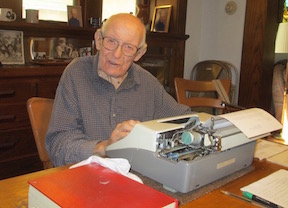 My father, Don Irish, died in April of 2017. For the last five years of his life, many of us helped him write his memoirs. We self-published the book in 2015. I share an excerpt here that seems particularly relevant to the harassment of untenured professors (often people of color) that is occurring across the country now. The excellent Aimee Morrison has a forthcoming piece on the current version of this dilemma: “a piece on academic viral media that will appear in the next month in the Routledge Companion to Digital Humanities and Media Studies.” The relevant section below, related to my dad’s harassment, and indeed quasi-firing, is called “An unexpected challenge.”

Dad loved to underline words for emphasis and I have left his underlining in place, along with his frequent use of quotation marks.

…[W]e came to Bellingham [Washington] so I could teach Sociology for Western Washington State University students. At that time at Washington State all the faculty members were titled “Instructors.”(There were no Assistant, Associate, or Full Professors with a common rank order related to performance and length of service). Sometime after I left that institution, the faculty secured a change in the “Instructor” title for all positions. It ignored length of experience, failed to recognize quality of teaching, and made it financially difficult whenever a faculty member sought positions at other institutions. However, students did often refer to us as Professors, whatever our station.

At my first faculty meeting, at least 20 minutes were spent with a discussion of how high the water for the campus fountains should rise! (Why not leave that decision to the custodians?) Then at the fall annual faculty formal dinner, it was indicated that agreement had been reached that none of the wives should stand up when introduced because some were pregnant! So, I began hesitantly to wonder how “sociology theory” might relate to this institution of higher education!

Course work—As a newcomer on the Department’s faculty I was assigned to present Introductory Sociology classes. In addition, I was able to serve as instructor for Social Problems, which included a variety of aspects, as indicated by its title, and Marriage and the Family. Sociological Theory and advanced Statistics were left for the older faculty members. My colleagues became fine friends, and we shared our insights and knowledge.

One emphasis that I had developed for myself I labeled “Experiential Sociology,” not as a single course, but as an emphasis in widening “education.” Students may read assigned texts and other materials, prepare term papers on a theme in which they had special interest, attend all the lectures, give class presentations on their preferred themes, secure good grades on tests, and be a pleasant and attentive student. However, one can read, hear, speak, even prepare term papers on a theme of interest and still not experience, be exposed to, internalize the values related to the actualities while remaining limited to their own experiences and values.

As a new faculty member I did not yet have many relationships in the wider community. We and they needed wider exposure. The majority of my students, as for many other school classes, lived predominantly “white and middle” class lives. So, I endeavored in Bellingham and its surrounding area, to create ways and to expose students to other realities, to provide them with unfamiliar experiences. I would have been able to do this more consistently and extensively with longer teaching experiences and involvements in the communities in which the students and I primarily lived. That is, I sought to provide experiential sociology.

Examples:   For “social problems” classes, I arranged with the Sedro-Woolley “institution” for “mentally disturbed patients” for students to share in some of their programs for a weekend. We went there Friday afternoons and returned Sunday afternoons. Student participation was voluntary, not required, but I found most of them who could arrange their schedules did participate. So they had a chance to play cards, dance, view movies, eat meals, play ping pong, work on puzzles and so on, with one or more of the patients – not necessarily the same patient for each “venture.” The institution agreed to provide the overnight accommodations, meals together with the patients, and so on, with some staff time to aid the students to understand those situations more. Then, the students, also being citizens, will have had exposure to a “problem area,” and they can then say/feel “Oh, now I understand better….”

I’ve had similar trips to prisons, with arrangement with staffs, to meet the directors, social workers, chaplain, etc. The students only observe the prison cells from distant metal doors; balconies stacked one above the other, keys to lock and unlock several gates, etc. We never walked down the rows of the cells, violating the privacy of the occupants. However the students were exposed to the “layout.” One time, a cell occupant merely heard us talking at the end of a long row, and called out “don’t sneer, you may be next!” For classes in “Marriage and the Family,” I invited individuals who had been divorced, others who were widowed, and other variants to provide students with “greater and wider insights” of different lives. When I’ve lived in a community longer, of course, I can have more friends who are willing to share their life experiences with students….

An unexpected challenge– Should the best knowledge we teachers have be taught? To secure an enlightened citizenry, each generation needs to be exposed to a range of appropriate new knowledge and views. What is then “current” may alter or challenge earlier “wisdom.” For example, our globe is now viewed as round, not flat, as earlier for some. Continued research in science proceeds to validate the concept of evolution, and “gender” is no longer applicable and useful in dividing individuals just into “male” or “female” for humans and some animals. Thus, challenging “traditional” may be provocative, while enhancing future understandings and use.

As a teacher first at the secondary level, but thereafter with “higher education,” presenting “new information” or challenging “traditional truths” may be deemed to be “propaganda” by some, but certainly provocative as “new information.” I began college instruction just after World War II. “Feelings were high” and much information had been with-held and remained unknown to our citizenry. My lack of tenure did not lead me (in a democracy) to withhold information relevant to my field of knowledge and some expertise.

This was my first year at the Washington State University. Almost every text for Introductory Sociology included one or more chapters related to “Public Opinion and Propaganda.” My classes were in the late 1940’s, and after the official end of World War II. I read then to my class a number of cablegrams (no emails then) that were related to the communications among President Roosevelt in DC, the USA Admirals Harold R. Stark and Husband Kimmel in Hawaii, and our US Ambassador Joseph Grew in Tokyo, issued virtually two years before we became officially involved in World War II with a “Declaration of War” (by 1942). …These communications among the authorities were given to me by Kirby Page. He was then in Seattle on a lecture tour, a man well-known to many peace-oriented citizens then in our nation.

Brief space precludes my providing many details (apart from Kirby’s presentations). Japan lacked fuel resources, not having oil, gas, coal, and other fuel sources. My remembrance is that we (USA) blocked that country’s access to them. Also, I have learned that the USA had sunk a Japanese submarine considerably before the Pearl Harbor attack; we were “unofficially” in the war by providing varied weaponry and other aids to British and French “allies.” Not included in these cablegrams, of course, was the utilization of nuclear bombs on two major Japanese cities by the USA, which came later. However, I understand that Japan had already sought peace arrangements with the Soviet Union. The claim the nuclear bombs were needed to “end the war” is thus challenged.

Back to our Sociology class. After my sharing these communications in class, one of my Sociology students, a young man, reported to his Psychology professor that Prof. Irish was propagandizing the students in his class. “Not knowing the innards,” I suspect that the psych professor informed the University President, Dr. Haggard (the name I recall). In a very short time, one that seemed insufficient for any “check up,” seeking my explanation, Dr. Haggard called me to his office. He asked me to resign! That was not a decision I wished to make “on the spot,” seeking time for wider consideration and some systematic investigations. I was gratified when the local chapter of the American Association of University Professors (AAUP) indicated their concern and willingness to assist in resolving the problems. One lesson I learned anew was: “don’t judge persons much on first impressions.”

An officer of the AAUP was the head of Speech Department. He was a pleasant, gracious person, but so “slick” in his speaking and related mannerisms that I didn’t expect much aid from him. However, he became my staunchest supporter regarding my right and role in sharing with students the examples of hidden and delayed information regarding our nation’s official actions! I was cleared of blame. The President offered a plan: That I continue to teach that year, take a year off to pursue my Ph.D. at the University of Washington in Seattle, and then return for an additional period with them in Bellingham. (Relief! – with a wife and two young daughters and a professional record to build!) As it turned out, we went to Seattle, but didn’t return to “fill-out” the time at Washington State.

…I have considered myself to be an “early whistle-blower” by having experienced this minor challenge at the University in Bellingham. How can professional historians develop adequate accounts of the pasts of their nations (and ours) with censorship/secrecy? How can our citizens (and others in their own countries) make intelligent choices when choosing their governmental officials or voting on issues of major importance, if they are not provided with the full background? I believe that awaiting the opening of some archival material 40 years later (as has been the case in our nation) is obviously too late to aid in voting on current candidates or policies. Climate change issues are now vital concerns for the entire world. Everyone will need to have best knowledge and collaboration to work out solutions. If we intend to remain a vital democracy, we cannot continue to function well if our citizens (and others) are left ignorant and unprepared for very significant decisions of the past (to learn by). The futures for youth throughout the world are at stake!

My belief is that we in the USA cannot continue as an empire, with half of our discretionary budget going to war-related purposes. We cannot then effectively and promptly satisfy our domestic needs (education, health, transportation, and many other concerns). We need to re-read the results of the Roman, British, French and other imperial nations. Our USA citizens need to recognize that others do not like to be dominated, have their resources taken, cheap labor exploited, governments replaced by (coups), and with thousands of our troops stationed in many more than 130 countries. (How many foreign bases are in the USA? None that I know of.) No wonder we feel and are opposed by those whom we call “terrorists,” who we define by “labeling theory,” whereas our behaviors are not so defined….