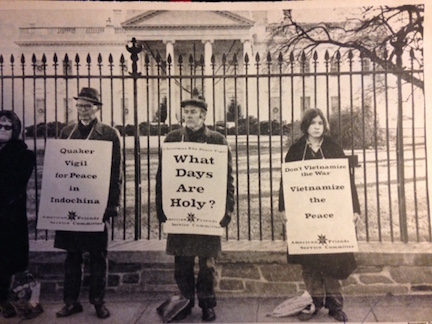 I am not proud to say that I stopped writing politicians several decades ago. OK, I’ve sent an occasional email, usually prompted by some Facebook post, but my overly-long, impassioned missives to national and state officials ended with my use of the typewriter and carbon paper. Similarly, this old newspaper photo of me in front of the White House protesting the Vietnam War made me feel badly at how rarely I show up for protests these days. I’m still mad, still opposed to the drone devastation, Guantanamo, bombing raids, renditions, and on and on…but, but what? I confess it seems pointless, as the Koch Brothers continue to buy our government. But today I wrote to Governor Rauner. It may still be pointless, but, what to do? I kept my message very short and devoid of the RAGE that I feel about the way so many people are treated as disposable and all the programs being demolished that, however imperfectly, aim to serve those folks. This state has been poorly-run for a very long time and there are many systems to blame, while a few people have profited handsomely from the dysfunction, corruption,and callousness. I wrote to the state legislators, too, who are no doubt at least as frustrated as I.

Dear Governor Rauner [I did not say “Dear Bruce”],” I wrote today, “I support a progressive income tax–as in, tax those of us who can afford to pay for a better Illinois and stop punishing the most vulnerable among us. The state budget impasse has permanently damaged so many non-profits and schools that we cannot recover. Still, we must solve the crisis immediately and begin to repair the damage as quickly and as best we can. Compromise, please, with your equally stubborn and egotistical opponents.
Sincerely, Sharon Irish

Dear Sharon, the Governor [via his robot-minion], replied nearly immediately,
I appreciate you taking the time to reach out to my office about tax reform in Illinois. My staff is reviewing your message. Please know I value your opinion and thank you for sharing it with me. Hearing from people in Illinois gives me a better idea of what is impacting local communities across the state. Knowing those opinions helps me make decisions for you in Springfield.
Please feel free to contact me in the future. My office phone numbers are (217) 782-0244 and (312) 814-2121.
Sincerely,
Governor Bruce Rauner

So I called and left a message on the machine. Will the machine call me back? To be continued…maybe.