Fred Turner’s 2013 book, The Democratic Surround: Multimedia & American Liberalism from World War II to the Psychedelic Sixties (University of Chicago Press), is a readable prequel (as he called it) to his previous book, From Counterculture to Cyberculture. In researching the earlier book, Turner was intrigued with the ways in which the 1940s and 1950s in the US introduced ideas that gained prominence in the 1960s and, he claimed, this foreshadowing challenges the view that the 1960s was “top-to-bottom revolution” (p. 8).  He observed that Bauhaus designers who joined with psychologists and cultural critics created a “new media genre” that he called “democratic surrounds” comprised of multi-source multiple images, which in turn fostered the “ecstatic multimedia utopianism” of the 1960s (p. 2). According to Turner, Margaret Mead and Gregory Bateson developed a theory of “surrounds” as “arrays of images and words built into environments that their audiences could enter freely, act spontaneously within and leave at will” (p. 63). Turner’s fascinating account of the interconnections of social scientists and museum professionals described the “symbolic environments in which Americans could make meanings for themselves…cafeteria style” (p. 74). Mead and Bateson, channeled by Turner, “envisioned the museum as the proper setting for a new kind of propaganda: one that would nurture both the individual democratic personality and the collective sense of national purpose” (p. 75). 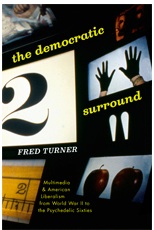 The communication between the self and the social world that took place in these surrounds shaped individuals and their societies (p. 47). Turner summarized Erich Fromm’s papers about “the relationship between the personality and mass communication, [noting that s]ociety and psyche formed a feedback loop” (p. 51). Turner provided a genealogy for this psycho-cultural media relationship by analyzing some of the ideas of the Bauhaus, Herbert Bayer (“extended field of vision”) and László Moholy-Nagy’s “wildly vertiginous aesthetic” (the New Vision, p. 82). Turner worked with great material here and, perhaps, is presenting these theories in a new context to his disciplinary colleagues in Communication. In Turner’s intersection of the social and the personal, I stumbled, however. While I appreciate his not inconsiderable efforts to identify and describe the ideas of Korzybski, Hayakawa, Adorno, Lewin, Maslow, Bateson, Krakauer, Mead, Bayer, Moholy, and Steichen, it wasn’t clear to me how these movers and shakers would have defined democracy and what notions about “choice” the attendees at these exhibits actually came away with. Yes, the United States entered World War II, but did the propaganda (or “programming”) really have that much to do with it? Turner quotes Elizabeth McCausland’s response to the 1942 “Road to Victory” exhibit: “In the kinesthetic relation between the one who sees and what is seen lies the explanation of the moving psychological effect of the exhibition” (p. 107). Where is the evidence that the 80,000 attendees were in fact emotionally moved?

Am I too presentist and biased in my belief that profiteering and imperialist aims had more to do with US interests in that war? Turner rightly pointed out: “Moholy could simultaneously acknowledge problems in American society, obscure their social-structural roots, and shift the site of their solution from the governmental to the personal level” (p. 95). I then would have welcomed a critique of Moholy’s (and others’) position, pointing out that this “obscuring of structural roots” and shifting of responsibility was an oft-employed strategy by powers-that-be well before and well after Moholy and the Committee for National Morale, for example.

By contrasting Bayer’s exhibit design for “The Road to Victory” with Friedrich Kiesler’s arrangement of Peggy Guggenheim’s collection, Turner suggested an equivalence of the two exhibits that wasn’t convincing to me. A private gallery space (even Guggenheim’s) is not the same as the Museum of Modern Art’s attempt to make a single multi-sensory point about “American character.” Perhaps a broader discussion about the “political stakes of exhibition design in this period” would have made the point more effectively about the attempt to “reinvent the traditional relationship between viewers, art, and the spaces in which they encountered one another” (pp. 109, 108). An aside: Turner’s description of Bauhaus “surrounds” like Herbert Bayer’s walk-in globe in “Airways to Peace” (p. 112) reminded me of walking into Anish Kapoor’s Millenium Park sculpture in Chicago, “Cloudgate.”

The chapter, “The New Landscape of Sound,” introduced me to a wealth of new ideas and information. While I am fairly familiar with Black Mountain College history, and John Cage’s and Kenneth Patchen’s works, I was intrigued by “the bebop band” as a “a conversation, a community of sound” (p. 117).  The work of Chicago-based semiotician Charles Morris was new to me. I found the psychological links to the political choices clearer here than in the previous chapter. Turner excerpted Morris: “‘Democracy…would involve the extension to social relations at large of the pattern of moral relations between smaller groups of individuals’” (pp. 123-24). Turner also effectively explained the way in which Cage’s “surround aesthetic” migrated “into the world of men and women and bodies” (p. 147) at Black Mountain and into the following decades.

Turner began Part II of his book, “The Democratic Surround in the Cold War,” with the observation: “[T]he bomb unleashed not only a new understanding of humankind’s ability to destroy the globe, but a vision of a relationship between [sic] psychology, communication, and politics that might save it” (p. 152). This idea seems to be the crux of Turner’s book and it clearly connects to the way in which Turner characterized the 1960s: “ecstatic utopianism.” He took a look at Arthur Schlesinger, Jr.’s post-war “hazy analysis” of how “benevolent interactions” in society “could ultimately save democracy.” Turner aligned Schlesinger with the ideas of Norbert Wiener and Lyman Bryson, who similarly called for “individual autonomy within a collaborative, empathetic society” (p. 177). He then compared Schlesinger’s optimism with the realization of David Riesman that industry was interested in “proper workers” in which the workers would be “knit…ever more tightly into the systems of production and consumption within which they worked” (p. 179).

The 1955 “Family of Man” exhibit at the Museum of Modern Art, which Turner noted has gotten plenty of critical attention, aimed to get Americans to see themselves and others around the globe as similar, despite their racialized and cultural differences. Turner argued that that “recognition” by visitors depended “on two aesthetic elements: the welding of the Bauhaus surround to the pattern of the individual life course, and the use of individual images as mirrors and windows into the psyches of visitors” (p. 203). Again, Turner explored the idea of the personal as political as he argued that many “American intellectuals and government officials understood international relations in essentially interpersonal terms” (p. 214). The “surround” became one tool “with which to bring together the citizens of the world” (p. 215). While Turner described the “new vision of the democratic personality” on the part of people like Buckminster Fuller, I think he should have used his authorial prerogative to stress that this “democratic person” was a fiction that continued and reinforced the strategies of not-naming and not-facing the responsibilities of an imperial state (p. 215). He hinted at the control and power inherent in these cultural efforts, but I would have preferred a less dispassionate discussion. He noted: “Cold War [geodesic] domes did not simply represent a modern American vision; they formed it into a three-dimensional, all-encompassing experience” (p. 221). Clarify, please, whose vision and whose experiences are being validated. I felt that Turner sometimes conflated the messy variety of people’s lived experiences with the unity and harmony that the exhibit designers hoped their work might catalyze. It is one thing to design a circular architectural form and quite another to have that form actually produce a “nonhierarchical social structure” (p. 236).

While many artists and designers may have aspired to flattened social structures, the Cold War strategists certainly did not share that goal. Police states do not operate on democratic principles. John Cage, Allan Kaprow and Happenings, and “young Americans” received too much credit in Turner’s book , in my opinion, for their contributions to media environments.  “Young Americans” and “Happenings” are coded “white,” (p. 269) and Kaprow and Cage, while significant artistic figures of the avant-garde, were hardly dominant presences in popular culture. The acknowledgement that Turner made about the “fault lines of power and discrimination” (p. 270) in the 1960s could and should have been explicitly acknowledged about the “democratic surrounds” of the previous decades: they too were surveilled, gendered and racialized.

Turner reflected toward the end of the book that “[t]he Human Be-In also marked an ending, a culmination even, of a way of imagining the relationship between media, polity, and self that had its beginnings thirty years earlier” (p. 291).  It is certainly likely that I missed a lot in this ambitious, sweeping book, but the storyline was just a little too neat for me. While I don’t doubt that media shape individuals and society, and obviously an author has to start and stop somewhere, I am not convinced that the intriguing “democratic surround” was a concept that promoted equality beyond those already inclined to take actions for justice outside of the displays, exhibits, and events.