The Mozilla Foundation has joined with the National Science Foundation and U.S. Ignite to sponsor a “killer app” challenge. The deadline is August 23. Today I submitted my idea, which you can see here along with many, many others. (There are monetary prizes.)

This is the 150th anniversary of a mass execution of 38 Dakota men in Mankato, Minnesota, in December of 1862. Waziyatawin reports this history in this post. Many more Dakota people died during imprisonment during that winter. Thinking about this genocidal history during a recent trip to Minnesota, I decided to propose an “app” called STOLEN LANDS, BROKEN TREATIES. 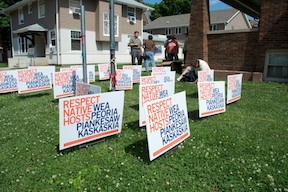 Here’s my proposal. The Mozilla Ignite questions are in italics.

The pitch: in 140 characters
U. S. residents occupy land stolen from indigenous peoples. How can we learn about the land and its inhabitants before us?

The solution:Describe your proposed solution. How does it address the problem or opportunity you’ve identified? (Aim for 400 words or less — brevity is the soul of wit.)

This application for mobile devices will use location services and then pull in historical and geographical data to help visualize the location prior to settlement by white people. Of course, native peoples moved across landscapes over time, so the app will allow the user to specify a fifty year time frame and see the numbers and identifications of different groups in the area. Recognizing that the boundaries of the United States are political, when appropriate, the app will indicate cross-border connections in Canada or Mexico. In the event that the user is on Indian-occupied land, such as a reservation or predominantly tribal area, the app can still be used to show historical changes over centuries.

In which category does your idea fit?

How will your idea make people’s lives better? Specifically, who would benefit and at what scale?

Mainstream U.S. culture is historically ignorant, and generally unconnected to the land which makes our lives possible. By providing the means to learn about the particular place where a person finds him/herself, individuals or entire classrooms or groups of learners can gain a perspective on their location, as well as become aware that history takes place, that it is spatial as well as temporal. This app can do much more than promote historical awareness, however. As Waziyatawin noted (in a different context) in 2007, it could “compel a reworking of the existing social order…. Truth-telling in this context becomes a major act of decolonization.”

How does your idea take advantage of next-generation networks? Does some version of this already exist? What current technological limitations are making your idea hard to execute? What challenges do you expect?

No version of this app exists to my knowledge. The need for historically accurate digital maps as well as a means to correlate the maps to tribal locations, movements and treaties over time are not so much a technological limitation as much as a digital humanities problem. It is possible that this work has been done and I do not know about it. Further, there is the belief that humans do not “own” the land, but that it is a gift that we should cherish and nourish. Given that our society has, in fact, colonized the land and made it into property, I think this app’s main challenges would be assembling and displaying accurate information based on widely distributed data. In any case, for this size of a country, with several centuries’ of region-specific information, there is big data to manage and interpret, which needs high-speed broadband.

Are you interested in making your idea a reality? Do you want to try and build this app? If so, do you need help? What kind of help — guidance, mentorship, learning materials, more team members? (This won’t have an impact on how your idea is judged — we’re just curious.)

I would need a research team of indigenous historians and geographers, programmers and marketers. I have only have the traditional skills of an historian.

The form then asked for external links to support the idea, so I linked to Waziyatawin’s work, that of Edgar Heap of Birds, and Debbie Reese’s blog.