What do a panel truck, a jib crane and the remains of a wooden grain elevator have in common? All are being repurposed by an energetic, volunteer team of sculptors and designers for Urbana Land Arts Inter-Urban project. When it is all finished (soon–in August 2012!), it will be a mobile exhibition space, with the capability of unloading wooden risers from the truck using the crane. People can then sit and engage with whatever’s going on in or out of the truck when it parks in various spots around east central Illinois. The crane used to ride the rails and now will be pulled by a 1977 former potato chip truck. 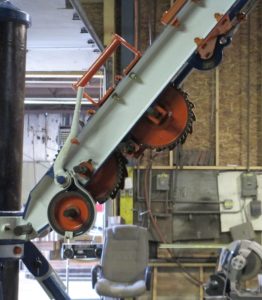 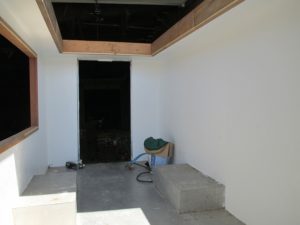 Hand-cranked, the crane in certain positions is capable of really heavy lifting. For enthusiasts of industrial archeology, it provides a front row seat to view railway-building or repair equipment manufactured in southern Minnesota in the early 20th century by the Fairmont Machine Company (then it became Fairmont Railway Motors.) The artists—Chris Carl, Bobby Zokaites, Paul Howe, and Sutton Demlong—extensively rebuilt the support platform, gears, cables, bolts, etc., so that it winds up very smoothly and rotates 360 degrees, as it did in the past. Bobby, Paul and Chris all met at Franconia Sculpture Park in Minnesota a couple years back. Chris invited them to join him over the last month in working really long hot dirty days in Bondville (just west of Champaign, IL)  to transform these old machines. Paul came from Greensboro, North Carolina; Bobby and Sutton came from Tempe, Arizona; and David “Prairie” Monk has provided space for them to work at the warehouse that he rents in Bondville.  Not only that, Dave salvaged the wooden elevator that used to be on Staley Road west of Champaign, as well as the jib crane that sat in Piatt County on property that Heartland Pathways owns. Dave is Mr. Salvage and has collected a huge variety of human-made and plant-made stuff since he arrived in Champaign in the 1960s. Seeds, bicycles, carpet pieces, photographs, posters, drawings, metal and wooden artifacts—you name it, Dave probably has it stashed somewhere. I am so grateful to Dave for all his dedicated work for decades on behalf of native plants and spaces and I am just delighted that Chris Carl and his colleagues have joined in artfully mobilizing some of the materials that Dave has rescued, exploring ways to connect us all to the heartland. 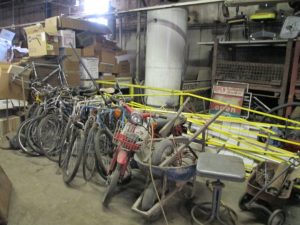 Inter-Urban will define a space and provide a context for a variety of exhibits, performances, and activities. It reminds me a bit of the recent visit to Chicago of the Seed Story Broadcast Tour and their collaboration with the Hull-House Museum and Raise the Roof farm. This mobile broadcasting studio collected audio stories, cleaned and exhibited seeds.

Another link to Inter-Urban through literally digging up the past and using it for new forms of artistic production is the railroad barge that David Sharps raised from the muck of New York Harbor in the 1980s. Now housing the Waterfront Museum and Showboat Barge, the 1914 wooden barge also travels to historic ship displays with the help of Tug Pegasus, a 1907 tugboat piloted by Captain Pamela Hepburn.