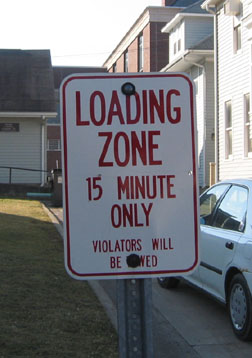 Edgar Heap of Birds might be labeled a conceptual artist; unfortunately a lot of people find conceptualism off-putting because it doesn’t stress the visual and usually it isn’t conventionally beautiful. While that term doesn’t fully describe Heap of Birds’ whole practice, it still might be useful to provide people with a label for his signage. Art historian Alexander Alberro defined conceptual art broadly: “[T]he conceptual in art means an expanded critique of the cohesiveness and materiality of the art object, a growing wariness toward definitions of artistic practice as purely visual, a fusion of the work with its site and context of display, and an increased emphasis on the possibilities of publicness and distribution.”  Alberro’s definition helps connect Heap of Bird’s art to the importance of these larger art-world issues: He questions the art object, challenges the prioritization of the visual and explores the artwork in relation to site, distribution, and audience.

Artists have long worked at the edges of what was considered art, challenging accepted norms of beauty, materials, and craftsmanship. When an artwork is set outside of a gallery (the norm in most of the world and throughout many centuries), artists also question the location and audience for their artwork, just as they have often challenged gallery visitors to think about that context. Artists who have asked similar questions about the nature, material and location of art, whom people might be familiar with, include Edouard Manet, Claude Monet, Paul Cezanne, and Pablo Picasso. Of course there are many less famous and more diverse artists who created wonderful art, but people often want to connect what they know to something new in order to validate it. We are pattern-seeking creatures, and we often convince ourselves of something’s worth by comparing it to something else accepted as valuable. Or we decide that something we don’t like or don’t understand is therefore worthless.

Facebook friends have been actively responding to the state’s attorney’s decision to charge a former UIUC student–who allegedly stole two of the “Beyond the Chief” signs–with a misdemeanor rather than a felony, because the SA decided that Mr. Heap of Bird’s work was worth only the materials it was made with, under $300, thus a misdemeanor rather than a felony. Smile Politely published an amusing response to that idea.