Here’s the press release that a group of us wrote to accompany distribution of the yard signs created in solidarity with Edgar Heap of Birds’ art installation, “Beyond the Chief.”

“Beyond the Chief” was installed along West Nevada Street in Urbana in February 2009 and asks viewers to reflect on political and social histories of central Illinois, especially those related to indigenous peoples. Since their installation, there have been six separate incidents of vandalism followed by the theft of two of the signs, the latter resulting in the June 18 arrest of a recent University of Illinois graduate. Despite these egregious instances of violence directed toward the artwork, there has been little official response from University administrators.

With “Beyond the Chief,” Heap of Birds adapts his text-based artwork, at least in part, to respond directly to the local campus community and the ongoing conflict surrounding the use of the sports mascot “chief Illiniwek” that promoted University of Illinois intercollegiate athletics for 81 years. Though the “chief” was retired as an official mascot in 2007, music and graphics still appear at Illinois sporting events in an unofficial capacity. On each of the twelve “Beyond the Chief” signs, “Fighting Illini” is printed backwards above the words “Today Your Host Is…” followed by the name of an indigenous group such as the Peoria, Kaskaskia, or the Wea, to inspire reflection on those American Indian communities that formerly lived in this region and the complex histories of this landscape.

“One thing I have thought about the ‘Beyond the Chief’exhibit is that it marks in specific ways previously unmarked and unnamed removals, ” said Robert Warrior, Professor and Director of the Native American House and American Indian Studies, and curator of “Beyond the Chief.” “Perhaps the local signs can do the same sort of naming, remembering and respecting the Peoria, Piankesaw, Wea, and Kaskaskia specifically.” Responding to the continued defacement of the artwork, a group of Champaign-Urbana citizens came together to design a reproducible sign to extend the original message of the Heap of Birds artwork to the community at large.

The design for the “Respect Native Hosts” yard signs was created with the input of Warrior and the artist, Edgar Heap of Birds, who expressed appreciation for all efforts to counter negativity towards the exhibit. It is hoped that the yard signs will open up private spaces for public discussion, and quickly show that homes all over Champaign-Urbana are working to build a community based on inclusivity and justice. The “Respect Native Hosts” solidarity yard signs will be available for free at the Native American House until they are gone. Drop by the yard of Native American House (1206 W. Nevada Street)  between 10AM and 11AM and pick up yours today!

It was incredibly hot and humid, so we sweated together as we chatted in the shade. We spoke to two television cameras and a couple of reporters. 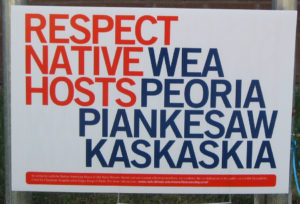