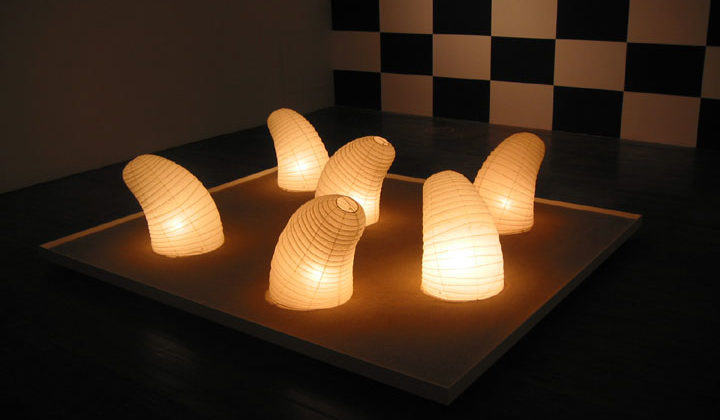 I have been having useful conversations with friends and colleagues about “Beyond the Chief” by Edgar Heap of Birds. Here I have linked to Debbie Reese’s blog and her commentary on the art when it was first installed. Today artist Kevin Hamilton told me about this 35-minute documentary (2006), Fits and Starts: A Deer Diary, available on You Tube. It is about the vandalism of a life-sized, rhinestone-encrusted sculpture of a deer called “Fits and Starts” that was placed on the campus of Depauw University in Greencastle, Indiana, in 2005 by artist Marc Swanson. The work was so badly damaged in the two weeks that it was on display that it had to be removed. I was intrigued by the range of responses to the art and the subsequent vandalism, and found some of the reactions instructive for us at Illinois, in the wake of the numerous vandalisms of “Beyond the Chief.”

Administrators, faculty and students gathered at the site of the deer sculpture for speak-outs and represented a range of opinions. It was hard to tell in the film, but it also looked like there were large pieces of paper on the ground with written responses to the events. And two art students created a sculpture that they installed after the deer was removed, as a commentary on “what belongs on campus” and “what is art.”  The student collaboration was of a polo shirt that had been stiffened with the collar flipped up. That work was stolen within 24 hours!

Depauw’s response also included interviews by students of faculty and other students on the university television and radio stations, and a public forum that seemed to include the donors. The takeaway is that people were UPSET and felt that the vandalism reflected badly on the campus. Additionally, the controversy prompted extensive conversations in and out of class and postings on Facebook, which the faculty and students saw as a positive exchange of viewpoints.

Other ideas that have been shared with me in the past two days include implementing signage that has sensors embedded in it so that touch would trigger an alarm of some sort (this wouldn’t work if people continue to bring offerings); yard signs that would express solidarity with the artwork and its message; and protective cloth coverings for the signs, akin to Sarah Ross’s archisuits.