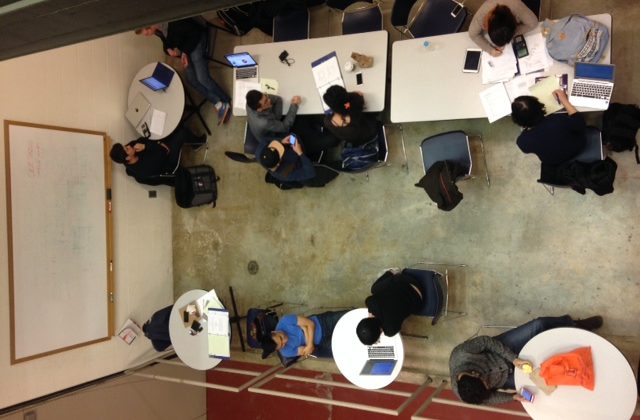 I like the word “stigmergy,” which according to Wikipedia means “a mechanism of spontaneous, indirect coordination between agents or actions, where the trace left in the environment by an action stimulates the performance of a subsequent action, by the same or a different agent. Stigmergy is a form of self-organization. It produces complex, apparently intelligent structures, without need for any planning, control, or even communication between the agents. As such it supports efficient collaboration between extremely simple agents, who lack any memory, intelligence or even awareness of each other.”

Now when we talk about the “emerging online practices [that] enable the extreme scaling seen in mass collaborative projects such as Wikipedia.org” that Mark Elliott wrote his dissertation about, we are starting to look at the new directions in the humanities that was the subject of a recent symposium at the University of Illinois. We heard John Unsworth talk about “The Value of Digitization for Libraries and Humanities Scholarship.” He outlined issues related to digital surrogates, and we discussed the two-way (at least) visibility of cultural heritage, in terms of audience and access. There were a number of interesting projects that John mentioned in passing that relate to stigmergy in one way or another: the InterPARES Project, The International Research on Permanent Authentic Records in Electronic Systems, now in its third phase; the Open Content Alliance; Educause.

I have a long way to go to really wrap my head around text mining, Zotero scraping of a database, and so on. My immediate response to ways to preserve and highlight “cultural infrastructure” is that it may be a response to the recent and recurrent call for making the humanities count for something. Patricia Cohen in the New York Times (February 25, 2009) wrote “In Tough Times, Humanities Must Justify Their Worth,” that “traditional liberal arts education is, by definition, not intended to prepare students for a specific vocation….Questions about the importance of the humanities in a complex and technologically demanding world have taken on new urgency.” She quoted Richard M. Freeland, the Massachusetts commissioner of higher education: “We’ve created a disjuncton between the liberal arts and sciences and our role as citizens and professionals.” Rather than ONLY emphasizing the “practical and economic value” of the humanities, however, which in the short term is hard to gauge imho, I think digital humanities in stigmergic collaboration could go a long way to address a range of human needs, including learning across differences.