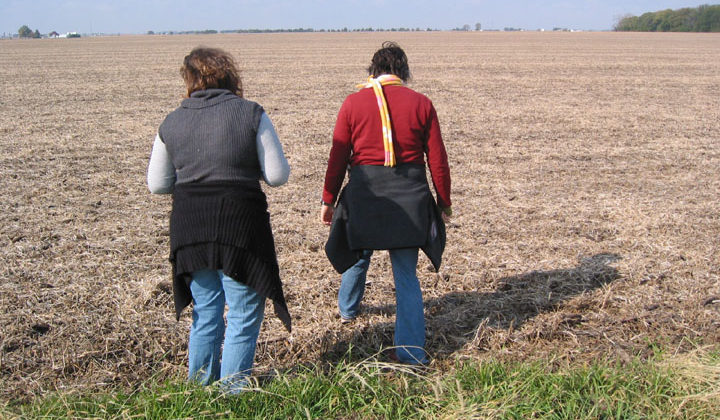 The Journal of Aesthetics and Protest #6 is out! There are some very fine pieces in it too. Thanks to Robby Herbst, I was able to look it over. Amy Franceschini is interviewed by Christina Ulke on the San Francisco Victory Gardens+2007. Urban agriculture is on the rise, coast to coast. Amy F’s folks were farmers and each had very different takes on the politics of food, but she has her own version, including teaming up with Slow Food Nation to garden in front of SF’s City Hall. There are some nice b&w photos of the garden juxtaposed with the Beaux-Arts municipal headquarters. I got to meet Christina when we were together on the Political Equator 2 trip over a year ago. So, I am glad to “reconnect” with her in print.

There’s an article about InCUBATE, closer to my neck of the woods: the Institute for Community Understanding Between Art and the Everyday, in Chicago. They are committed to exploring a range of sources for support of cultural production. The late Ben Schaafsma, the author of this article and co-founder of InCUBATE, cited one of my favorite books, The Revolution Will Not Be Funded (South End Press, 2007). (Ben died October 25, 2008, at age 26, after being struck by a car while walking in NYC. What a loss!)

Brett Bloom and Bonnie Fortune tell readers about the Midwest Radical Culture Corridor and the Library of Radiant Optimism. It was a pleasure to gather at Bonnie and Brett’s house last summer to hear about part of the mobile symposium around food security issues that they helped organize. Continental Drift (Brian Holmes‘ ruminations on neoliberal globalization and then some) started in Champaign-Urbana and moved north and west. They’ve already collectively published a book about some of what they learned: A Call to Farms!

I really liked learning about Julianna Parr’s crafts nights that she holds in bars. Googly eyes, paper, gluesticks, whatever, and a few drinks, really gets the conversations going! Speaking of conversation Daniel Tucker and Nato Thompson staged regional meetups with particular invited guests to talk about models of art and activism, in Los Angeles, New Orleans, Baltimore, New York City, and Chicago. They had a set series of questions and asked individuals to speak about two or three of them, very briefly. Suzanne Lacy was part of the Los Angeles conversation. The questions were about how art motivates an audience, how the local economy affects people’s art practice, how a particular artistic event expanded social networks and offered political potential, how a politically-engaged art practice relates to social movements, and how these practices tie into larger, national structures. Christina Ulke quoted Lozeh Luna: “DETRAS DE NOSOTROS ESTAMOS USTEDES,” a saying that has a wonderful Mobius strip-like meaning. Not sure I know what radical aesthetics are, but I liked this issue of JOAAP. Keep it up!