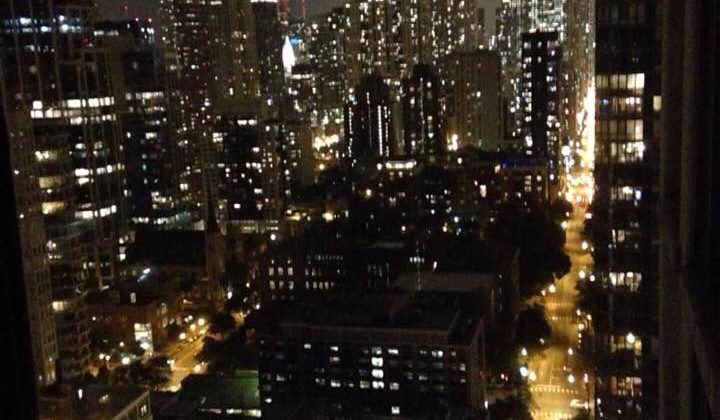 The Builders Association performed their show, “Continuous City” last night here in Champaign-Urbana. I was intrigued by the publicity, since it was supposed to be about cities, social networking, and theatre all at once, and how cool is that? The funders also touted the “boundary-pushing” and “cross-cultural” understanding of interdisciplinary art productions like this one. First of all, I’m glad that Marianne Weems, director, Harry Sinclair, writer, et al., brought this to our campus. Weems has been and is in a position to really think about arts in a globalizing world, having directed some other interesting pieces here before–Alladeen and Super Vision–and co-edited, with Brian Wallis and Philip Yenawine, a book I’ve used, Art Matters: how the culture wars changed America. In the program notes, Weems cites Calvino’s Invisible Cities and Mike Davis’s Planet of Slums as contributing to the development of this work. So, the bar is set pretty high.

On the plus side, the video work was pretty nifty and at times stunningly beautiful. I’d like to know more about how it was done. Peter Flaherty did the video design and you can learn more about him at www.thefourthefive.org The ideas behind the production were wonderful: video contributions from Shanghai, Mexico, Toronto, and KCPA, with an amusing “vlog” by Moe Angelos. Harry Sinclair as Mike was good as a globe-trotting, clueless father who, in his exhausted, unshaven way, was trying to sell a video-networking product he didn’t believe in, to people who already had satisfying in-the-flesh relationships. And his daughter, Sam, was great as a sullen, precocious, and cute kid.

But–of course there is a “but”–with all this techno-savvy and on-stage skill, the performance was ultimately about the lead character J.V.’s inability to have intimate relationships. That theme is treated much more profoundly and richly by many other playwrights. Rizwan Mirza’s J.V. didn’t convince me that he was a stressed out Internet entrepreneur. He seemed way too relaxed for that. And the metaphor of cutting off possibilities by going into a tunnel was really unsatisfying as an ending. I’m usually disappointed by endings, but this one seemed a cop-out.

Perhaps it comes down to “social architecture,” what Richard Farson in 1970 recognized as something we need to build in order to match (or compensate for, I’m not sure) the level of the technology we have set up. It seems like the technology on stage last night was flashy, sophisticated, funny, and capable of subtlety, but the dramatic storyline was too thin, too undeveloped, to support all that computer wizardry.

There were some inklings of social complexity, with food security, immigrants, and sprawl having brief mentions. It was thought-provoking as the family members were fuzzy and static-y, the images of Mike kept breaking up, and Sam kept hiding from her dad. But the evidence of resource-intensive, upper/middle-class ownership and production juxtaposed with a seeming lip service to papadum sellers in Mumbai or Vietnamese living in U.S. trailer parks rankled. Am I ungrateful that at least these folks are trying? No. Do I want more? Yes.