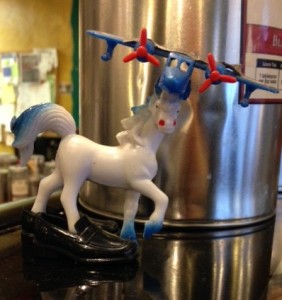 A toy horse with an airplane fixture, stands in Ken-doll plastic loafers. This sort of DIY assemblage has humor, weirdness, and possibilities that I like. See #2 in Anne Balsamo’s list below.

We at the University of Illinois, Urbana-Champaign, got an email on November 25, 2015, inviting us to town hall meetings in early December about a campus-wide Design Center that has been in the works for a couple of years. The Design Center website also solicits input, but does not indicate to whom this input should be directed. So I am taking a blanket blog approach….

Acknowledging that the last few years at this institution have been particularly fraught with unethical, intolerant and/or incompetent behavior, which has, among other results, decimated Indigenous Studies, caused morale among students, staff and faculty to plummet, and filled many positions on an interim basis, not to mention diverted attention from efforts like the Design Center planning, I would still like to stress that the timeline for input about the Center is ridiculously tight. How are adjustments to be made using that input, when the architects are to get the brief early in 2016 (as I understand it)? That said, I thank those who have clearly put substantial time into developing the proposal.Â Given the short amount of time, I have just sketched a few ideas, informed by science and technology studies as well as my presence on campus for 30 years.

First, consider and learn from past campus efforts, some of which are still ongoing. (A range of past experiential learning and interdisciplinary research efforts include: Urban Exchange, Civitas Community Design Center, East St. Louis Action Research Project, Center on Democracy in a Multi-Racial Society, Unit One/Allen Hall and other Living-Learning Centers, iCHASS, Illinois Informatics Institute…) Large sums of money were sometimes spent, often with little agreement on what success might look like. While â€œsuccessâ€ť should be regularly considered and, possibly, redefined, the experimental nature of these research and pedagogical efforts must accommodate â€œfailure,â€ť and an institutional acceptance of some messy vitality.

Next, I am bothered by the staffing model proposed, with “technicians” placed in a hierarchy that, once again, is topped by a tenured faculty member. In â€œdesigning differently,â€ť I suggest that the Design Centerâ€™s key challenges will be social, not technical: instead of staffing the Center â€œas usual,â€ť I would encourage a redesign where students direct the programming and have a substantial say in budget allocations, technologists are integral to planning and implementation of programming, and where communication among users, non-users, and possible users is a key priority. That doesnâ€™t necessarily mean that a faculty member couldnâ€™t direct the Center, but the staffing should be as carefully designed as the physical plant. As a â€œhub,â€ť the Center will be a socio-technical construction. The technical aspects, I believe, will be far easier to handle. If the social infrastructure consistently and continually challenges gender and racialized norms, contends with issues of ability and economics, and critiques the intended and unintended impacts of items that are â€œdesigned,â€ť that will be an innovative design center![1]

Anne Balsamo in her 2011 book, Designing Culture: The Technological Imagination at Work, stressed â€œhow innovation could be even more innovative in its scope of vision for the future if it were to take culture as the precondition and horizon of creative effortâ€ť (p. 3.) She then proceeded to list lessons about technoculture innovation, which I quote here, though I have cut out her useful commentary to keep this short:

FemTechNet‘s previous co-facilitator, Liz Losh, has framed aÂ feminist-cultural approach to understanding technology, which I think also applies to design thinking in many ways. I end with her list:

Technology is situated in particular contexts

I hope the Design Center intentionally focuses on students, particularly underserved and marginalized students, who are already working to design better, more just social structures and who foster critical examinations of what is innovative and who is being served by innovations.

[1]Â Impact constituencies are those who lose due to the design and maintenance of new technological systems. See John Staudenmaier, â€œThe Politics of Successful Technologies,â€ť In In Context: History and the History of Technology: Essays in Honor of Melvin Kranzberg. Research in Technology Studies, v. 1, Stephen Cutcliffe and Robert Post, eds. (Bethlehem: Lehigh University Press, 1989), 150-171.