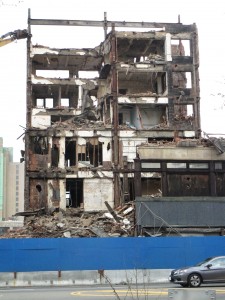 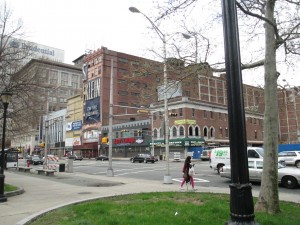 A couple of blocks of buildings along Broad Street, facing Military Park in Newark, are being demolished in 2013. These blocks included stores where many people once shopped, but have been vacant for quite a while. Apparently, the Prudential Company plans to build more office space once the land is cleared. As is often the case with a key economic stakeholder in a city, Prudential has shaped much of downtown Newark. An ensemble of Prudential buildings by George Browne Post was demolished in 1957; these dated from 1890-92 and were steel-framed and limestone-clad, in Romanesque Revival style. In 1926-27, when Cass Gilbert constructed the Gibraltar building for Prudential adjacent to the Post buildings, he designed elevated bridges to connect his structure to those of G.B. Post. When Postâ€™s buildings were torn down, so were the bridges. Gilbertâ€™s 14-story Gibraltar Building was renovated in 1997 by Grad Partnership and currently houses the Superior Court of NJ. 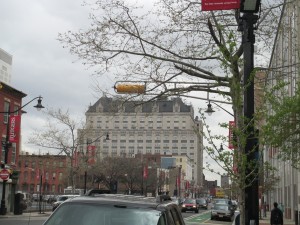 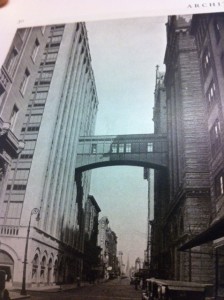 A few blocks from the Gibraltar Building, Gilbert designed the Kinney Building (1913-15, altered 1928). This steel-framed, limestone-clad building has a granite base and still stands at 788-92 Broad St (at Market). At twelve floors, it was an investment building on land owned by the Kinney estate; the Hedden Construction Co. was the contractor. The foundation was planned to carry four additional floors, but they were never added. Just down the block from the Kinney, at Broad and Mechanic Streets, is another Gilbert building, the National State Bank (1912).Â  In 2012, this structure was supposedly being rehabbed into a boutique hotel; construction appears to be ongoing in 2013. The ten-story Scheuer Building at Broad and Commerce, designed in 1905 by Gilbert for a firm of importing grocers, has been demolished. 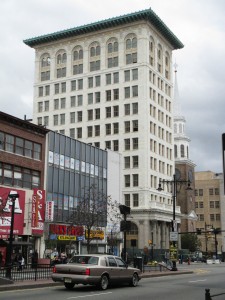 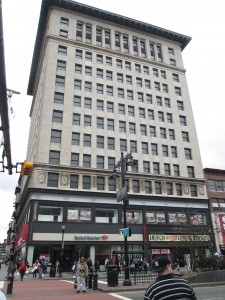 The first decade of the twentieth century also witnessed the design and construction of many of Newarkâ€™s public buildings. The City Hall of 1902-08 was built at 920 Broad Street (John and Wilson Ely, archItects.) The Newark Public library of 1901-03 faced Washington Square; the competition for the Essex County Court House was won by Cass Gilbert in 1901 and completed in marble and Tiffany glass in 1906. Gilbertâ€™s courthouse replaced the 1838 vaguely Egyptian Revival structure by John Haviland. On the axis of Market Street, the courthouse is visible from the commercial center of Newark. The sculptor of Mount Rushmore, Gutzon Borglum, created a “Seated Lincoln” in 1911 for the plaza in front of the courthouse. Newark-raised writer Philip Roth mentions this statue in his 1998 novel, I Married a Communist (p. 91) and just today in the New York TimesÂ (April 21, 2013), Roth eulogized his Newark high school teacher on whom the central character of that novel was based. Neighboring Hudson County officials liked Gilbertâ€™s design so much that Hugh Roberts, a local New Jersey architect, closely modeled his design for the Hudson County courthouse (1910) on it. The restoration of the Essex County Courthouse by Ford Farewell Mills and Gatsch took place in 2005.

Ernest F. Guilbert and James O. Betelle started off their architectural careers in the New York City office of Cass Gilbert. By the second decade of the 20th century, they had joined in practice in Newark, creating many schools in New Jersey as well as adjacent states. While Guilbert died in 1916, the firm continued under that name, designing the Essex Club in 1926 (the current home of NJ Historical Society). This Federal Revival, domestically-scaled building faces Military Park, and is just down the block from the Robert Treat Hotel (1916), also by Guilbert and Betelle.

Other buildings that we did not have time to look at on our tour of Newark, include:

I am in the New York City area this week to celebrate the centennial of the Woolworth Building, a skyscraper designed by the architect Cass. Gilbert. A group of folks, including especially Helen Post Curry and Chuck Post, along with Barbara Christen, have been key organizers of this ambitious week of activities. On April 24, I will lead a tour of Newark, NJ, where Gilbert designed and built a number of buildings. In preparation, I wrote up some of my research in this and the next post.

As a city in the United States, Newark is over three centuries old. Before Newark was occupied and built up by English settlers, the Lunaape (Lenape) people lived there. The Nanticoke Lenni-Lenape Indians of New Jersey are based in southern NJ; the Ramapough Lenape Indian Nation in the north (around Mahwah, NJ). Lunaape people also are now in Oklahoma. Since I am documenting some of what I know about the context of several twentieth-century buildings in Newark by the architect Cass Gilbert (1859-1934), I will not focus on the pre-19th century history, and just say that Newark was founded in 1666; it was incorporated in 1836. Named after Newark, England, it is nine miles west of New York City, and is the county seat of Essex County.Â  Broad and Market Streets were among the original thoroughfares and are still busy with traffic and people. Ten miles of waterfront include the Passaic River and Newark Bay; the lower Passaic River is a superfund site due to the long history of industrial pollution.Â

Among the industries that thrived in Newark were leather-tanning and brewing (tanning and beer do not an appetizing combination make!) The Morris Canalâ€”the bed of which is now mostly filled by train tracksâ€”was completed in 1831, connecting Newark and Phillipsburg (where it connected with other waterways.) For the next four decades, the canal transported ore to Pennsylvania, and coal to New Jersey. The Delaware, Lackawanna and Western Railroad (DL&WRR) moved into New Jersey in 1867, to connect to markets in New York. The canalâ€™s use waned and closed completely in 1923.

Important for this story is that the DL&W Railroad was a key connection of Cass Gilbertâ€™s: Samuel Sloan, who was president (and then chairman of the board) of the DL&WRR, and William Truesdale, DL&WRR president after 1899, were associates of Gilbertâ€™s through Howard Carroll. Carroll was vice-president of the Starin Transportation Company, and son-in-law of the president, John Starin. (Starinâ€™s company ran tugboats and lighters.) Carroll was the client for the Gilbert-designed West Street Building in Manhattan, which leased the top floors of that building to the DL&WRR upon its completion in 1907. Gilbert would have been well aware of DL&WRR acquisitions and rebuilding because he was in the business of joining clubs and organizations that included these men, such as the Ohio Society of New York.

In Newark, Truesdale added new stations and eliminated grade crossings in the first decade of the 20th century, when Gilbert was obtaining commissions on both sides of the Hudson. (The railroad work divided neighborhoods, as did the construction of the interstate [I-280] later.) These infrastructural changes in Newark paralleled cultural and governmental building projects there: the Essex County Courthouse competition, won by Gilbert, took place in 1901. The Newark Public Library (Kellogg and Rankin), the design of which was inspired by Italian Renaissance palazzi (e.g. the Strozzi) and the Boston Public Library, opened in 1901. The polymath, Dr. John Cotton Dana, became the library director in 1902. (Thanks to Linda C. Smith for the link to Dana’s biography.)Â There were several institutions of higher education in Newark; the Newark Museum Association was formed in 1909. 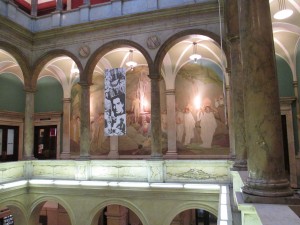 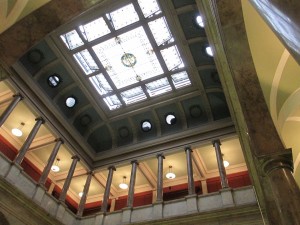 Commerce was thriving as well: Tiffany and Co. had plant there, and Newark was one of the great insurance centers, with seven home, fire, and life insurance companies. Prudential was Newarkâ€™s insurance leader; in 1903, the company owned the four largest office buildings, each about 11 stories. The 1900 census indicated that Newark had 246,000 people, the sixteenth largest city in the United States; by 1910, the population had increased to 347,469.

The Newark Archives Project will allow people to discover more about Newark: surveys have now been completed at the New Jersey Historical Society, the Newark Museum Library and Archives, the City of Newark Archives, the Newark Public Library, and the Institute of Jazz Studies at Rutgers-Newark. (Thanks to Dr. Nicole Cooke for the link to NAP.) Newark has been the home of a number of well-known folks: Amiri Baraka, Allen Ginsberg, Richard Meier, Philip Roth, and Sarah Vaughan.