On October 10, 2013Â I went to hear Professor Alice Pawley from Purdue University talk about her research on engineering education at the Electrical and Computer Engineering Colloquium at the U of I. 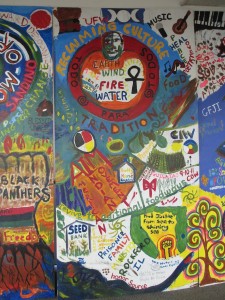 Alice Pawley is an associate professor in the School of Engineering Education with affiliations with the Women’s Studies Program and Division of Environmental and Ecological Engineering. She has a B.Eng. in chemical engineering from McGill University, and anÂ M.S. and a Ph.D. in industrial andÂ systems engineering with a Ph.D. minor in womenâ€™s studies fromÂ the University of Wisconsin-Madison. She runs the Research inÂ Feminist Engineering (RIFE) group, whose diverseÂ projects and group members are described at the website http://feministengineering.org/.

Pawley described her work as â€œcritical researchâ€ on engineering, because it asks whether the current approaches are what we want to be doing. Â Part of her critique is to examine the language we use to describe engineering, as well as the metaphors we use about career achievements. For example, she said the â€œpipelineâ€ metaphor doesnâ€™t work well for women because many of us have not taken a direct route on our career path. She joked, â€œIf you leak out of the pipeline, you are gone, and if you get back into the pipe, you are a contaminant!â€ Another goal of her research is to make engineering more inclusive. (At the University of Illinois about 16% of the engineering students are female; nationally, itâ€™s 20%; 15% of the students are of color, if I wrote these numbers down correctly as they zoomed by.)

She argued that the hidden or tacit rules that structure engineering that create a social and functional boundary that separates engineering from not-engineering. Consider: Who is solving engineering problems? Whose problems are considered worth solving? Who decides which problems to solve? Who benefits from problem-solving in this way? Pawley said that most engineers work on projects that are narrow in scope: commercial or industrial or military, but usually not domestic projects. Who makes small-scale things? Inexpensive, low-tech things? Some of these projects that might be considered engineering became â€œdomestic scienceâ€ or â€œhome economicsâ€ and the domain of scientifically-minded women.

Pawley noted that very little research has been done in engineering on raced work, in part because of what is defined as â€œengineering.â€ One exception is Amy Slatonâ€™s book Race, Rigor, and Selectivity in U.S. Engineering: The History of an Occupational Color Line (Harvard, 2010). Rather than framing issues around UNDERrepresention and using metaphors like â€œchilly climate,â€ Pawley is using life history methods to describe career paths of women and people of color: She has found a variety of terms used to describe these trajectories and also generally positive concepts, such as garden or water. She stressed the need for a polyculture of mental models, an ecosystem of metaphors so that the metaphor does not limit options.

Pawley cited the work of sociologists Joan Acker and Dorothy Smith as important to her research. Standpoint feminism helps discover the â€œruling relationsâ€ that impact our teaching, scholarship and learning. (See Smith, Writing the Social, 1999) Gender and race are intersectional, not additive. (We canâ€™t just assume women of color are like men of color.) We need to focus on consequences in meso- and macro-levels, not just micro levels, so that we understand the multiple ways in which educational systems affect individuals and their identity groups.

I was recently on jury duty and did some informal inquiry and observation about the current ways in which Champaign County (IL) finds jurors. On a Monday morning, about 35 of us showed up at the courthouse in downtown Urbana and had a brief orientation. The staff handed us badges with bar codes and our juror number on them along with a brochure about petit juries. The brochure said that my name â€œwas drawn by lot from the combined lists of registered voters, licensed drivers, holders of Illinois Identification Cards, and Illinois Disabled Person Identification Cards who reside in this county.â€ The county uses Jano Justice Systems software to generate the jury pool. Apparently since 2003, the county has been using Jano in tandem with New World Systems to integrate the record-keeping and data management of the courts, according to this one article I found. â€œTogether, Jano and New World will integrate multiple agencies, including the Sheriff’s Office, Correctional Facility, State’s Attorney, Juvenile Detention Center, Circuit Court and Clerk, Adult Probation, Juvenile Probation and Public Defender so each entity has access to critical information stored on a single system.” New World indeed. A detention center or a detention centre is any location used for detention. Specifically, it can mean:

Of the 35 people I saw that first morning in the jury assembly room, I saw two African Americans and one woman who was reading a Spanish language newspaper. Otherwise, everyone looked white. Thatâ€™s about 8 percent non-white. There is a Champaign County Citizensâ€™ Advisory Committee on Jury Selection that formed in 2008 to look at the racial disparities among jurors.Â  According to Brian Dolinar, writing on the Independent Media Centerâ€™s website: â€œFor several years the Courtwatch study conducted by the League of Women Voters has shown that while African Americans make up 60% of defendants, they represent 5%-6% of the jury pool.â€

I was called back for the afternoon and sat through the voire dire phase, without being called. It was fascinating to watch the 13 jurors being questioned and selected. The person on trial was a white male. The next day, I was told not to come in. The third day I was told to report at 9am. I did so and was called to the jury box. There was another white man on trial. I was dismissed by the judge shortly thereafter, and thus ended my jury duty for this round.

While I was waiting at various times this week, I read a really good article in Communication Theory from February 2003 (13:1, pp. 5-38) called “The Racial Foundaiton of Organizational Communication.” Authors Karen Lee Ashcraft and Brenda J. Allen noted that “the field’s most common ways of framing race ironically preserve its racial foundation.” They argued, rightly I think, that “the valuing difference approach ignores a … power problem. If corporate America is built around Whiteness–and if Whiteness is socially constructed as separate from and superior to darkness–how can we genuinely speak of valuing difference as a possibility?” (p. 16)