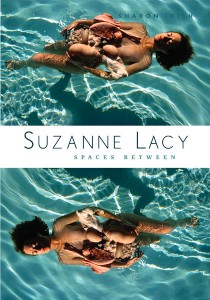 Suzanne Lacy: Spaces Between is my latest book. Watch the trailer here to find out what inspired the book. I worked with Bonnie Fortune to produce book trailer. I have been able to give some lectures about the book, in Urbana and Normal, Illinois, and Vancouver, British Columbia, so far! See the Links page for some of my other publications.

Now available for purchase online at Amazon and the University of Minnesota Press.

The central themes of my book, Suzanne Lacy: Spaces Between, are: using a scheme of networks to analyze Lacyâ€™s multifaceted art; considering gendered, racialized bodies in terms of positionality and performance; and recognizing participationâ€™s intertwining with reception. Here’s a summary of the book, chapter by chapter:

Chapter One, â€œVisceral Beginnings,â€ considers Lacyâ€™s educational paths with the Feminist Art Program in Fresno, California, and then with Sheila de Bretteville and Allan Kaprow at CalArts in Valencia. Works from the seventies–Rape Is and Ablutions (both 1972)–represent two contrasting formats, an artistâ€™s book and a collaborative performance, that confronted sexual violence. Her white female body provided source material and methods for those works, which also linked to Lacyâ€™s later explorations of violence. I argue that physical embodiment and positionality are critical to the meanings and understanding of Lacyâ€™s work.

Chapter Two, â€œEmbodied Networks,â€ takes a look at the literal and metaphorical use of networks in Lacyâ€™s performative art: â€œNet Constructionâ€ (1973); â€œConstruction of a Novel Frankensteinâ€ (1974-75); â€œOne Woman Showsâ€ (1975); â€œProstitution Notesâ€ (1974-76); â€œAnatomy Lessonsâ€ (1974-77) and â€œCinderella in Dragsterâ€ (1976). Lacy used solo and collaborative performances, map-making and collage, as well as writing, photography and video to question the limits of the body and the self. The Feminist Studio Workshop and the Los Angeles Womanâ€™s Building were key organizations for Lacy in the seventies.

Chapter Three, â€œThe Urban Stage,â€ considers the city-wide expansion of Lacyâ€™s projects, particularly â€œThree Weeks in Mayâ€ and â€œIn Mourning and In Rageâ€ (both 1977, with Leslie Labowitz). Lacy co-founded Ariadne: A Social Art Network in 1978. Ariadne organized a series of events around violence against women in that same year: â€œFrom Reverence to Rape to Respectâ€(Las Vegas) and a â€œTake Back the Nightâ€ performance (San Francisco). Participation in these performances shaped the form, content and reception of these works.

Chapter Four, â€œConvergence,â€ is concerned with several large-scale performances in the eighties: â€œRiver Meetingsâ€ (1980); â€œImmigrants and Survivorsâ€ (1983); â€œThe Dark Madonnaâ€ (1986) and â€œThe Crystal Quiltâ€ (1987). Most were framed by an architectural or urban space, temporarily claiming that space for an issue-based performance, which in turn redefined the meanings of that public or semi-public space. These combinations of image, movement, sound, and space had antecedents in earlier experimental film as well as the pageants of the early-twentieth century suffragists. As with the suffragistsâ€™ pageants, the spatial aspects of Lacyâ€™s events both challenged and affirmed social hierarchies.

Chapter Five, â€œWe Make the City and the City Makes Us,â€ focuses on a piece in Chicago that used multiple sites in the city, â€œFull Circleâ€ (1993). This city-wide organizing, over an extended period, with attendant workshops, dinner performances and videos, established a reciprocal relationship with urban structures, deepening the meanings both of sites in the city of Chicago and of Lacyâ€™s piece. Both Chapters Five and Six stress the ways in which built space has been an important component of Lacyâ€™s large-scale works.

Chapter Six, â€œTurning Point,â€ takes a close look at The Turning Point and the performance, â€œUnder Construction,â€ that Lacy did in 1997 in Vancouver. The differences between Lacyâ€™s public art and community cultural development created problems, but the work also offered opportunities to young women and the city as a whole.

By way of conclusion, â€œSpaces Between, Still Inter/Acting,â€ returns to themes of the body, its spiritual dimensions, and coalitional politics.

Lacy has shown an enduring commitment to using art in public to inform people about issues of common concern to affect policy. I suggest that the â€œspaces betweenâ€ in her art provide openings that might be transformative for selves that are permeable and multiple. Diana Fuss noted in 1991: â€œThe problem, of course, with the inside/outside rhetoric, if it remains undeconstructed, is that such polemics disguise the fact that most of us are both inside and outside at the same time.â€ We perform, moving between art and life, built space and human flesh. This â€œbetween-nessâ€ creates tension, at once dynamic and troubling. To enact these relationships in reality, on the ground so to speak, is especially difficult given the separation from, indeed denial of, our bodies. Lacyâ€™s art has embraced the body, deepened into spirit, and enhanced bodily wisdom with strategic, intelligent analyses of politics. Her international career has demonstrated the power, problems and possibilities of art between the spaces of our diverse lives, as she has attempted to create structures that might give shape to a non-sexist, multi-racial democracy.